VANCOUVER, BC , July 26, 2021 /CNW/ - NexGen Energy Ltd. ("NexGen" or the "Company") (TSX: NXE) (NYSE: NXE) (ASX: NXG) is pleased to announce commencement of field programs focused on detailed geotechnical site confirmation studies on the Project and regional exploration drilling at the 100% owned, Rook I property (the "Property"), in the Athabasca Basin, Saskatchewan .

Leigh Curyer, Chief Executive Officer, commented: "Recommencement of field activities incorporating regional exploration whilst simultaneously advancing the Rook I Project through final engineering and permitting is an exciting time for NexGen.  The NexGen group has a tremendous track record of discovery and the geological team has been looking forward to recommencing exploration drilling on what they consider to be the most prospective land package globally. Further, the detailed field work this summer is a foundation to future surface and underground infrastructure at the Rook I Project .  "

Troy Boisjoli , Vice-President, Exploration & Community, commented: "We are very excited about the 2021 exploration program. Over the past number of years, exploration and drilling activities have been focussed on optimally developing the strategic Arrow Deposit and this 2021 program is focusing on making new discoveries by evaluating highly prospective exploration targets on the Rook I property. The Derkson Corridor is significantly under-explored. The 2021 exploration program is the culmination of a rigorous process in defining highly prospective drill targets. The NexGen geological team is excited to recommence drilling". 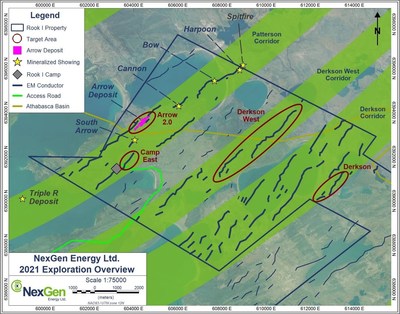 Arrow 2.0 – The Arrow Deposit is open and remains highly prospective at depth; integration of geophysics (Magnetic and 3D-ZTEM data) and structural interpretation indicate Arrow is hosted on the limb of a large-scale fold that extends to great depth, which suggests the conditions favourable for localizing uranium mineralization also continue to depth. Furthermore, drilling at Arrow shows uranium mineralization, brittle structures, and hydrothermal alteration continue below Arrow. Arrow 2.0 target is designed to be a significant step down-dip from Arrow at depth to test for the replication of high-grade mineralization. 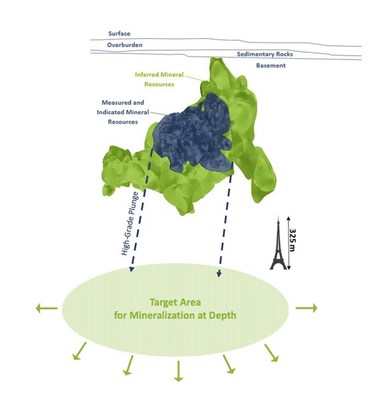 Camp East – Lies along a recently defined north-northeast mineralized trend that includes the Arrow and South Arrow Deposits. Camp East was initially targeted and drilled in 2016 and returned highly prospective alteration, structural disruption, and anomalous geochemistry; intersections of anomalous Boron – a primary pathfinder element – have higher concentrations than the Arrow Deposit. Targeting at Camp East is focused highly prospective geophysical areas where bends and off-sets in the conductor have been interpreted as having increased potential to localize uranium mineralization within the north-northeast mineralized trend from Camp East through South Arrow and Arrow.

Derkson Corridor – Exploration will focus on two target areas on the Derkson Corridor; a parallel conductor to the southeast of the Patterson Lake Corridor ("PLC") that hosts the Arrow Deposit and several other zones of high-grade mineralization along trend.

The first target area lies on a series of northeast-southwest trending conductors at the edge of a prominent magnetic domain that represents favourable structural conditions for brittle reactivation and focusing mineralizing fluids. The target area is along strike to the southwest of historic drill hole DER-04 that intersected 2.5 m of 0.24% U 3 O 8 ; an indication of a uranium fertile trend. Previous drilling to the southwest of the first target area has revealed anomalous boron intersections of up to 424 ppm in drill hole RK-15-070. Drilling will target northeast of the boron anomaly at jogs in the conductor that have potential to localize hydrothermal fluids and uranium mineralization.

The second Derkson target lies along a similar northeast-southwest trending conductor to the PLC. Drilling in this area will target zones of structural dilation along the conductor that are interpreted to represent favourable locations for localizing uranium mineralization. A prominent jog on the conductor where the conductive signal weakens along strike of anomalous geochemistry has been prioritized for early program drilling.

In addition to the exploration program, field work will be completed in support of Front End Engineering Design ("FEED") on the Rook I Project through advancement of further site investigations, both underground and surface. Surface investigations will include the completion of test pits and sonic boreholes in locations of planned surface infrastructure. The execution and analysis of these site investigation programs will build upon significant studies that have been incorporated in the recently released Feasibility Study ("FS") (see News Release dated February 22, 2021 ). Also, diamond drilling will focus on geological, geotechnical, and hydrogeological characterization of the rock mass proximal to the underground Life of Mine ("LOM") infrastructure in support of FEED. The drilling will further validate the current design and support the final design of the Underground Tailings Management Facility ("UGTMF"). 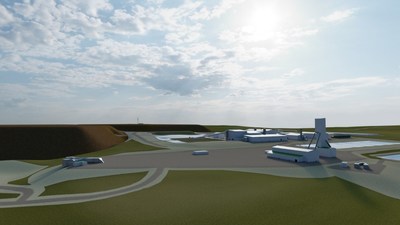 NexGen has a highly experienced team of uranium industry professionals with a successful track record in the discovery of uranium deposits and in developing projects through discovery to production.  The Company is the recipient of the 2018 PDAC Bill Dennis Award for Canadian mineral discovery and the 2019 PDAC Environmental and Social Responsibility Award.

All technical information in this news release has been reviewed and approved by Anthony ( Tony) George , P.Eng, NexGen's Chief Project Officer, and Troy Boisjoli , Geoscientist Licensee, Vice President, Exploration & Community for NexGen. Both are a qualified person under National Instrument 43-101

A technical report in respect of the FS is filed on SEDAR ( www.sedar.com ) and EDGAR ( www.sec.gov/edgar.shtml ) and is available for review on NexGen Energy's website ( www.nexgenenergy.ca ).

The information contained herein contains "forward-looking statements" within the meaning of applicable United States securities laws and regulations and "forward-looking information" within the meaning of applicable Canadian securities legislation. "Forward-looking information" includes, but is not limited to, statements with respect to mineral reserve and mineral resource estimates, the 2021 Arrow Deposit, Rook I Project and estimates of uranium production, grade and long-term average uranium prices, anticipated effects of completed drill results on the Rook I Project, planned work programs, completion of further site investigations and engineering work to support basic engineering of the project and expected outcomes. Generally, but not always, forward-looking information and statements can be identified by the use of words such as "plans", "expects", "is expected", "budget", "scheduled", "estimates", "forecasts", "intends", "anticipates", or "believes" or the negative connotation thereof or variations of such words and phrases or state that certain actions, events or results "may", "could", "would", "might" or "will be taken", "occur" or "be achieved" or the negative connotation thereof. Statements relating to "mineral resources" are deemed to be forward-looking information, as they involve the implied assessment that, based on certain estimates and assumptions, the mineral resources described can be profitably produced in the future.

Forward-looking information and statements are based on the then current expectations, beliefs, assumptions, estimates and forecasts about NexGen's business and the industry and markets in which it operates. Forward-looking information and statements are made based upon numerous assumptions, including among others, that the mineral reserve and resources estimates and the key assumptions and parameters on which such estimates are based are as set out in this news release and the technical report for the property , the results of planned exploration activities are as anticipated, the price and market supply of uranium, the cost of planned exploration activities, that financing will be available if and when needed and on reasonable terms, that third party contractors, equipment, supplies and governmental and other approvals required to conduct NexGen's planned exploration activities will be available on reasonable terms and in a timely manner and that general business and economic conditions will not change in a material adverse manner. Although the assumptions made by the Company in providing forward looking information or making forward looking statements are considered reasonable by management at the time, there can be no assurance that such assumptions will prove to be accurate in the future.

Forward-looking information and statements also involve known and unknown risks and uncertainties and other factors, which may cause actual results, performances and achievements of NexGen to differ materially from any projections of results, performances and achievements of NexGen expressed or implied by such forward-looking information or statements, including, among others, the existence of negative operating cash flow and dependence on third party financing, uncertainty of the availability of additional financing, the risk that pending assay results will not confirm previously announced preliminary results, conclusions of economic valuations, the risk that actual results of exploration activities will be different than anticipated, the cost of labour, equipment or materials will increase more than expected, that the future price of uranium will decline or otherwise not rise to an economic level, the appeal of alternate sources of energy to uranium-produced energy, that the Canadian dollar will strengthen against the U.S. dollar, that mineral resources and reserves are not as estimated, that actual costs or actual results of reclamation activities are greater than expected, that changes in project parameters and plans continue to be refined and may result in increased costs, of unexpected variations in mineral resources and reserves, grade or recovery rates or other risks generally associated with mining, unanticipated delays in obtaining governmental, regulatory or First Nations approvals, risks related to First Nations title and consultation, reliance upon key management and other personnel, deficiencies in the Company's title to its properties, uninsurable risks, failure to manage conflicts of interest, failure to obtain or maintain required permits and licences, risks related to changes in laws, regulations, policy and public perception, as well as those factors or other risks as more fully described in NexGen's Annual Information Form dated March 11, 2020 filed with the securities commissions of all of the provinces of Canada except Quebec and in NexGen's 40-F filed with the United States Securities and Exchange Commission, which are available on SEDAR at www.sedar.com and Edgar at www.sec.gov .